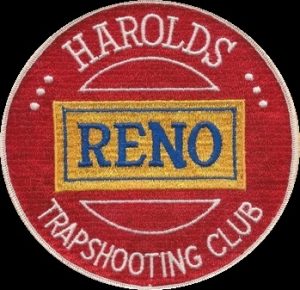 Harolds wasn’t the only Northern Nevada club with gambling that the Smiths owned for decades. In 1950, the renowned gambling family purchased Jabberwock Gun Club, located on the Pyramid Lake Highway in what today is Spanish Springs,* and renamed it Harolds Trapshooting Club.

“For more than two decades, [it] was where the elite met to compete,” according to the Trapshooting Hall of Fame website.

Well-known locals who frequented it included Evelyn Primm, wife of Ernest J. Primm, owner of the Club Primadonna; Raymond A. Smith, Pappy’s son and co-owner of Harolds Club, along with his wife Olga Smith; and Charles “Charlie” Mapes, Jr. and his sister Gloria Mapes Walker, co-owners of the Mapes hotel-casino.

The Smith patriarch, Raymond I. (“Pappy”) had been instrumental in getting the trapshooting club established. He and Charlie Mapes each had donated $2,500 to secure the building, and Pappy subsequently invested $24,000 into developing the facilities.

Upon opening, in January 1949, they included 12 traps, eight skeet fields and two flyer fields along with a lounge, sundeck, dining room, bar and locker rooms. Later, cases displayed guns of famous trapshooters like Fred Etchen and Arnold Riegger, and the walls showcased hundreds of photos of event attendees. Eventually, the fields would number 32.

The Requisite Gambling
By March, Pappy had gotten licensed for and had added gambling and a bar to the “gun club,” as it was called familiarly among Harolds Club employees. Initially, one craps table and three or four 21 games were available. Over time, though, the offerings grew to six to eight 21 tables, two craps tables, a roulette wheel and 50 to 60 slot machines.

The gaming concessions were open only during shoots. On those days, a pit boss and dealers from Harolds Club would pack up a car there with money, trays and whatever else was needed. This included a bankroll of about $50,000 (about $518,000 today) — which the boss carried around in his pocket all day — and close to $100,000 in chips ($1 million today). They’d drive the 12 or so miles out of Reno to the gun club and be open for business at 7 a.m.

“I saw the biggest action that I ever saw in my life at some of those shoots,” wrote Dwayne Kling, former Harolds Club pit boss, in A Family Affair. “In those days you could bet seven hands on a 21 game, and we would have people that would bet $1,000 each on all seven hands. We’d also let them bet $1,000 on the crap table.”

The gambling operation stayed open until the patrons were done playing, which meant the staff members could be there until the wee morning hours, occasionally all night long. Typically, when they left for the day (or night), they returned to Harolds Club and dropped off the money, chips and equipment. Sometimes, though, when the gambling went all night, the employees couldn’t fit that in, and massive amounts of money would remain in the gun club.

Showman Harold
Of the three Harolds Club owners — Pappy and sons Harold S., Sr. and Raymond A. Smith — Harold was enamored with the gun club and shooting the most. He was involved in developing and hosting the inaugural Golden West Grand, the first major Amateur Trapshooting Association tournament, in 1952. He dreamt up the trophy of an engraved, silver belt buckle containing a historic $20 gold piece.

At the events, he’d often pass out gifts to shooters and guests. One year he distributed 1,000 white Stetson cowboy hats; another year, it was slot machine-shaped bottles filled with Jim Beam. He’d give rides to contestants’ wives and children up and down the yard line in a yellow dune buggy or on his motorcycle while decked out in a New York Yankees uniform and cowboy hat.

A Dead Target
Harolds Trapshooting Club closed on June 30, 1979, when the casino and the landlord of the gun club property failed to agree on terms for a new lease.

* On the site of the former Jabberwock/Harolds today are the Lazy 5 Regional Park and the Washoe County Library’s Spanish Springs branch.