In the mid-afternoon of Tuesday, February 2, 1943, smoke emanating from a third-story apartment in Lakeview, Illinois led to the discovery of a woman dead inside — her face, head and neck mutilated, her body burned.

She was identified as 31-year old Estelle Evelyn Carey, one of the roommates residing in the unit at 512 W. Addison Street.

Gorgeous Woman, Hideous Crime
Described as “tough as nails” and “beautiful,” Carey worked as the “head dice girl” at The Colony casino in Chicago, at 744 N. Rush Street, had dated the club owner, mobster Nick Dean, and sidelined as a photographer’s model. Members of the local underworld knew Carey as “Nick Dean’s girl” (The Racine Journal-Times, Feb. 5, 1943).

“[Dean] had taken her when she was a waitress and lavished silks, furs, jewels and his trust upon her,” reported the United Press (UP) (The Racine Journal-Times, Feb. 3, 1943). “He installed her in a Gold Coast apartment and made her the ‘Queen’ of his gambling concession (Feb. 4, 1943).

Experts concluded Carey’s attacker, somebody she likely knew, forced her to sit then battered her face with a rolling pin, shattering her nose; yanked out clumps of her red hair; bludgeoned her skull with a blackjack (a club); hacked her throat with a serrated bread knife; and set her on fire.

“She apparently staggered out of the chair after her torturer and fell to the floor, preventing the fire from spreading above her waistline, but not until she had been severely burned around the legs,” said William Drury, the acting police captain investigating the crime, adding that “she suffered agony.” 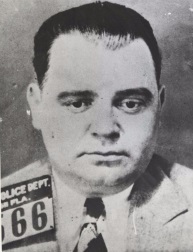 Dean, born Nicholas Deani Circella, was a former Al Capone associate and henchman of William “Willie” M. Bioff, former boss of the Motion Picture Operators’ Union. At the time of Carey’s murder, Circella was serving an eight-year sentence in federal prison for his involvement in extorting money from Hollywood movie executives by threatening labor problems at the studios.

1) Robbery: Carey grossed about $500 to $600 a week (about $8,000 to $10,000 today) and owned many expensive accessories and fine clothes. Maybe she was tortured for the location of her cash or baubles, the latter stashed in a shoe bag. Also, a neighbor witnessed a man leaving Carey’s apartment by the back stairs at about 2 p.m. carrying two fur coats turned inside out; Carey’s roommate later confirmed the very same were missing. In recent months, more than 50 fur coats had been snatched from residences in the surrounding area.

2) Information Seeking: Carey may have been squeezed for the location of Dean’s money, presumably a fortune, gained from his gambling and labor racketeering enterprises.

“Dean’s former gambling associates have had slim pickings in recent months and may have believed she knew where the money was concealed,” Drury said (The Racine Journal-Times, Feb. 3, 1943).

3) Jealousy: Police considered “the possibility that Carey was slain by a suitor in a fit of jealous rage,” or by the jealous wife of a lover, perhaps, reported the UP (The Racine Journal-Times, Feb. 4, 1943). The dice girl was a favorite of the male clientele at The Colony and was known sometimes to have more than one amour at a time.

4) Gangland Revenge: When investigating Dean and his labor extortion racket in 1941, the FBI questioned Carey extensively, and information she provided allegedly had been used against Dean in his conviction. Were his associates now, more than a year later, retaliating for her having cooperated with the agents?

5) Pre-Emptive Striking: Perhaps worried that if the feds interrogated Carey again that she would divulge more about the Chicago Outfit’s two major enterprises — labor racketeering and gambling — the bosses wanted to “cool her off,” thereby preventing her from doing the syndicate harm (The Racine Journal-Times, Feb. 5, 1943).

Chicago police pursued all of the above angles yet failed to ferret out the perpetrator. However, their No. 1 suspect was Chicago mobster Marshall Caifano (alias John Marshall), particularly since he was known to use a blowtorch on his murder victims.

The case of Estelle Carey went and remains cold.