California Faro Dealer Loses It … All 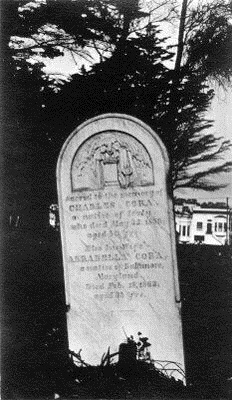 Charles and Arabella “Bell” Cora were a colorful, rich and well-known San Francisco couple whose lives jolted into misfortune one Saturday night in 1855.

He, 39, had made his money from dealing faro in Northern California mining camps and the city during The Gold Rush. Prior, he’d broken numerous faro banks in Louisiana and Mississippi, consequently, was banned from many gambling houses. He was “the foremost faro player on the Mississippi,” R.K. DeArment wrote in his article, “Gambling in the Old West.”

She, 27, had earned her wealth as a madam of a high-end brothel on Dupont and Washington streets. Though the two weren’t married, Bell used his last name.

“At the pinnacle of their professions, they were the elite of the sporting crowd, well acquainted with the top political and professional leaders of the city,” wrote Charles L. Convis, author of True Tales of the Old West: Gamblers.

Mutual Provocation
On Thursday, Nov. 15, the Coras were watching the play, Nicodemus, at the American Theater when during intermission, some men seated below recognized and shouted out to Bell. She playfully acknowledged them, after which both parties gestured bawdily to one another.

Sitting in front of the Coras, the wife of General William Richardson, a U.S. marshal, took great offense and asked her husband to make them stop. William, 33, demanded the Coras leave, but they wouldn’t. He asked the manager to force them out, but he, too, refused.

Can’t Let It Go
The following night, Charles and William encountered one another again, first on the street then in the Cosmopolitan Saloon, where they had words in between drinks.

The next afternoon, William loudly went from watering hole to watering hole looking for Charles and revenge. When he found him, though, he seemed to have forgiven him as both imbibed more alcohol together at two watering holes before parting.

Later, William approached Charles in front of Montgomery Street’s Blue Wing Saloon and together they walked down Clay Street.

When they stopped at the corner of Leidesdorff, Charles aimed and fired his pistol at William’s heart. Dead almost immediately, William slumped to the sidewalk.

“One version has it that [Charles] Cora slammed [William] Richardson against a building, pinning his arms, and, as Richardson screamed ‘Don’t shoot! I’m unarmed,’ Cora shot him in cold blood,” wrote Dr. Weirde in the article, For Whom the Belle Toils.” “Another version: Cora collared Richardson, Richardson reached for his weapon, and Cora fired first in self-defense.”

The Daily Alta California noted, “Murders have been committed for robbery or from motives of revenge, but for this last there appears to have been no inciting cause but an unnatural thirst for blood” (Nov. 18, 1855).

Justice with a Twist
The police arrested Charles, whose trial took place in March of the next year. For his defense, Bell hired a slew of attorneys, two of whom later would become U.S. Senators — E.D. Baker (Oregon) and James A. McDougall (California).

The jury was hung and Charles, beyond bars, awaited a second trial in April.

Before that could occur, about 3,000 citizens angrily stormed the jail, armed with shotguns, rifles, swords, knives, and revolvers. Agitated by a second recent murder — that of newspaper man James King by city supervisor James P. Casey over a disparaging editorial — the newly reformed Vigilance Committee demanded Charles and James Casey’s release. He and his men greatly outnumbered, the sheriff complied.

The mob held unofficial trials for both men, who were found guilty. The minimum for a majority found Charles guilty; as for James, the same verdict was unanimous.

The committee members allowed Charles to marry Bell, which he did inside “Fort Gunnybags,” the vigilante jail. At 1:15 p.m. that day, Thursday, May 22, from poles they rigged on their office building’s roof, they publicly hanged both men and left them there for nearly an hour.

“Almost every man, woman and child in the city was either a spectator or participator,” reported California’s Sacramento Daily Union (May 24, 1856).