Busted for Running Gambling in Nevada 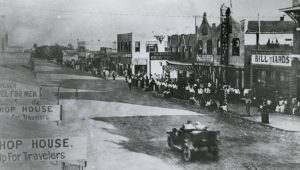 The year brought indictments in Las Vegas against individuals for violating Nevada’s anti-gambling statute, which was unusual because law enforcement generally ignored or poorly enforced it. Operating a gambling game then constituted a felony.

In 1916, most games of chance were illegal except for these that the legislature had allowed via passage of an act in 1915:

• Poker, stud-horse poker
• 500: a social, trick-taking card game* with two to six players that arose in America before 1900
• Whist: a classic English trick-taking card game with four players
• Solo: a trick-taking card game based on the English whist but in which one player often plays against the other three
• Parimutuel betting on horse races
• Slot machines with winnings used only toward the purchase of cigars and drinks
• Social games only played for drinks or cigars served individually or prizes not exceeding $2 in value

“The 1915 law seemed to have no effect on the illegal games, which increased in size and number each year. Bribes to allow unmolested games were so widespread that they were considered little more than a form of license,” wrote Jerome H. Skolnick in House of Cards: Legalization and Control of Casino Gambling.

The defendants were convicted of gambling and sentenced to serve from one to five years in the Nevada State Prison.

Laxity of the Law
However, for unknown reasons, the judge in the case, Charles Horsey, suspended the sentence of all of them.

Subsequently, all but the men associated with the Turf applied for a pardon, which the Board of Pardons denied in December of that year.

* A trick-taking game is a card or tile-based game in which play of a hand centers on a series of finite rounds or units of play, called tricks, which are each evaluated to determine a winner, or taker, of that trick.