Blaming It On The Dice 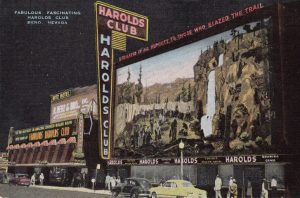 On the third Tuesday of April 1946, after work at the Southern Pacific Shop in Sparks, Nevada, Sam Lemel took the bus to Reno and went to Harolds Club where he played craps. He began by betting two half-dollars, which he lost. He left the casino and returned a bit later, only to lose four more half-dollars and a dime — ultimately down $3.10 (about $39 today).

From this point on, the version of events the self-described victim and the alleged perpetrator gave diverged.

What Lemel Relayed
Lemel asked for new dice, and Benjamin Shade, the dealer, provided two. When he asked for a selection from which he could choose, Shade wouldn’t accommodate him. Lemel informed the bouncer, Jack Filtzer, that Shade wasn’t following the state law on dice shooting. Filtzer, though, sided with his co-worker.

Lemel asked to speak to the casino’s co-owner Harold Smith about the game’s rules but was denied. So he sought out Smith’s office and knocked on the door, at which time two Reno policemen, Charlie Nichols and George Stone, arrested him and jailed him overnight. Lemel never swore, yelled or threatened to sue the police.

Harolds Club’s Perspective
Casino workers asserted Lemel was asked to stop playing craps because he loudly swore every time he lost. He demanded to see Smith and was told he couldn’t enter the money vault where Smith was. Lemel refused to leave the club and challenged Filtzer to toss him out or call the police. Filtzer did the latter, and when Nichols and Stone arrived, they arrested Lemel for disorderly conduct.

Drunk Tank Woes
Lemel sued Harolds Club and the Reno Police Department, claiming he was arrested falsely and detained “in a vile and loathsome cell with drunken, diseased and unclean people” for 18 hours (Nevada State Journal, Sept. 6, 1947). He stood most of the night, he said, to avoid catching germs. However, body lice and other bugs bit him, he claimed, resulting in a skin problem. At breakfast, because there weren’t enough dishes, in the form of pie plates and tomato cans, for everyone to use, he didn’t get any food. Worse, Lemel wasn’t allowed to communicate with his wife or attorney and wasn’t processed until the next morning. At that time, he pleaded guilty to vagrancy and was given a suspended sentence.

The trial took place in August. Harolds Club’s counsel, M.A. Diskin, asked that the action be dismissed because Lemel had pleaded guilty upon arraignment, thereby nullifying any scenario in which he’d been arrested without grounds.

Lemel’s attorney, Ernest Brown, countered that his client hadn’t pleaded to disturbing the peace but, rather, vagrancy, which meant he could sue and potentially collect damages.

Attorney George Lohse, representing the two officers, stated that if police officers aren’t permitted to do what Stone and Nichols had done when they’d arrested Lemel, “then it would be useless to try to operate a police force in any city” (Nevada State Journal, Oct. 12, 1946). Lohse added that Lemel had been loud, boisterous, heated and argumentative in Harold’s Club after losing and yelled, “You can’t run your _______ game that way,” an admonition meant for Smith (Nevada State Journal, Oct. 12, 1946).

The Judge Pontificates
Judge A.J. Maestretti ruled that Harolds Club, Smith and Nichols had been justified in acting as they had, and he scolded Lemel for having brought the suit. He told him he should’ve been thankful the parties involved had “rendered him a kindness and the service of protection” (Nevada State Journal, Oct. 17, 1946) as the situation could’ve escalated radically had they not stopped Lemel when they had.

On the issue of whether he could sue for damages after pleading guilty, Maestretti sided with the defendants, reiterating that a guilty plea or conviction should make it impossible to later claim false arrest. Instead of having pleaded guilty, Lemel could’ve requested an attorney, the course an innocent man would’ve taken.

Despite the reprimand, Lemel persisted in pursuing a case. In mid-December, he petitioned for a new trial, but Maestretti refused to afford him one.

In February of the next year, 1947, he appealed to the Nevada Supreme Court.

In September, oral arguments were presented to those jurists, who ultimately sided with the lower court, denying Lemel a new trial.