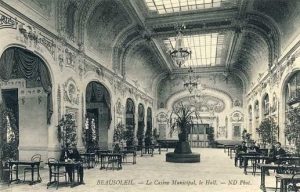 In 1918, the United States Army requisitioned Le Casino Municipal de Beausoleil, in France on its border with Monaco, for a YMCA center for World War I infantrymen on leave. In the main former gambling room, food was served to doughboys, including American-style bacon and eggs in mornings and, on Sunday afternoons, housemade donuts.

Between 1914 and 1918 the French had used the Beausoleil casino as a hospital. When the gaming house had opened originally in 1907, it’d offered baccarat and petits-chevaux.