In each of two consecutive summers, Northern Nevadans experienced on-site, parimutuel* betting on new types of organized races locally: first, midget car in 1937 and greyhound (the dog, not the bus) in 1938.

The public events were held at Lawton’s Hot Springs,** a motel-casino resort located five miles west of Reno on then-U.S. 40. The popular spot for tourists during the hot months had been open since the late 1880s. 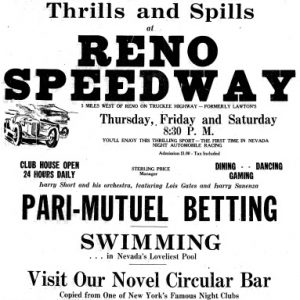 Skid Marks in Their Wake
At Lawton’s, in May, Sterling Price had a 1/5-mile, oval, asphalt macadam racetrack for midget cars built. It was said to be the only completely banked course in the United States; the curves were tilted 5 feet and the straightaways were raised 2 feet to maximize the cars’ speed. (The world speed record for that track size had been 135 mph.)

The race cars were midgets, which had a single-seat chassis, four-cylinder front engine and a rear-wheel-drive layout.

Alongside what he dubbed the Reno Speedway, Price had constructed two grandstands and a parimutuel betting machine in between them.

Additionally, Price carried out $75,000 worth of improvements (about $1.3 million today) to the property. They included converting the ballroom into a casino and bar, remodeling the dining room and cabaret and adding a cocktail lounge. His plan was for his firm to operate the races and cabaret only and lease out the other concessions, including the swimming pool, hot baths, gaming and restaurant.

The debut of midget car racing at Lawton’s was slated for June 25, and 40 days of races were touted. Eight to ten races, including a 15-lap main event, were to be held each night, with a minimum of 21 cars participating. At the Reno Speedway, the crowd was to get its fill of thrills, crashes, wagering — which was new to the sport in the U.S. as gambling was legal in Nevada — and, sometimes, even payoffs.

“Midget automobile racing is one of the fastest-growing sports in the country, and already has thousands of followers in California. We will offer the finest competition with the finest drivers in the country,” said Sterling Price (Nevada State Journal, May 2, 1937).

In fact, the sport had originated somewhere in California, where and when is up for debate, and by 1937 had become one of the hottest pastimes in San Francisco and Los Angeles. It was hugely popular in England, with each major race drawing 30,000 to 100,000 people in 1936, as well as Australia and New Zealand.

Day One Omen
The races at Lawton’s got off to a rough start. First, the grand opening was delayed a week because the track wasn’t dry in time. Then, on the night the event finally got underway, July 1, it was discovered the track was unstable, with loose spots causing the cars to gouge holes in the concrete. Further, the inside rail proved unsafe. Virgil Price (possibly a relative of Sterling), Reno Speedway manager, refunded the attendees their money and enticed them back with free admission the following night.

The track was repaired, and a three-day meet held subsequently.

Then signs of money problems appeared. In mid-July, bandleader Harry Short sued Motor Speedway for breach of contract and back pay as it failed to give him the required one week’s notice to discontinue services. Short had provided a five-piece orchestra and singer.

Within two weeks, various tradesmen, including a painter and electrician who’d done work on the speedway facilities, sued Virgil Price for lack of payment.

It’s unknown if the inaugural racing season at Reno Speedway ever even finished, but a paucity of newspaper articles on the subject after July 19 suggests that perhaps it didn’t.

A subsequent story about midget car racing at Lawton’s hinted at its fate: “The sport did not prosper at once, and the track was closed” (Nevada State Journal, April 2, 1939). 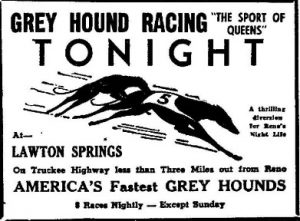 Greyhounds Beat It
The track was remodeled and reopened the next summer, in 1938, for a different type of races. “Sixty-four lightning fast dogs” were scheduled to kick off the season at the track of the Reno Kennel Club at Lawton’s. The canine stars had names like Max Baer (named after the boxer who actually had trained at the resort previously in the 1930s), Nifty Judgment and Sally Judgment. The dogs were to compete six nights a week, with eight races, including hurdles, held nightly and eight competitors in each.

Before the hounds raced, their trainers paraded them before the spectators, allowing them to choose their favorites and, if desired, place bets on them. When the greyhounds were released to race, they chased a life-like, electrical rabbit around the track.

Déjà Vu
Similar to the opening night with the midget cars, problems occurred during startup. Mechanical difficulties with the rabbits caused the last two races of the night to be postponed. Rain further delayed resumption of the events due to a wet track, but that happened a few evenings later.

By mid-July, however, no further mention of the races or results appeared in the local newspapers, leading one to deduce that the greyhound races in Reno had gone the way of the midget cars, curtailed in advance of the season’s finale.

Why do you suppose neither type of racing was successful?

* Parimutuel is a system of wagering on races in which the winners divide the total amount bet, less management expenses, in proportion to the quantities they wagered individually.

** Lawton’s Hot Springs was located at 9400 W. Fourth St., which now is within Reno’s city limits. The property has been shuttered and vacant since 1982.